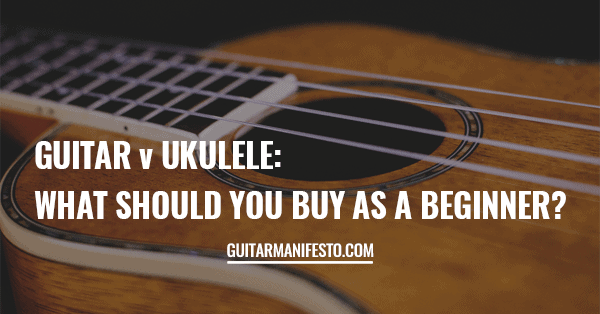 You know, Learning to play a musical gear is one of these decisions that can accompany a person for years to come, as it will be an initial commitment of time and funds. However, the two most common paths for beginners are the guitar and the ukulele. Both of them are string instruments but have many different strengths and weaknesses that can define your choice.

So, we have come up with an article that aims to shed light on this question, help you understand in-depth the differences between the two instruments, and which one is the best choice for you as an aspiring player.

So, is the guitar or the ukulele the best instrument for a beginner?

No offense, but the ukulele is an easier instrument to master and one which can be both cheaper and more portable, but it has a limited range compared to the guitar. The mighty guitar, on the other hand, is an instrument that delivers a much broader spectrum of combinations and it can excel in many different situations, being a more solid choice for a beginner.

This is the precise answer to the main question, but this topic needs to go much deeper in order to clarify a decision as important as learning how to play a new instrument. It is important to cover all the varying aspects that define this discussion and elaborate on all the little details that can make a huge difference when it comes to the defining characteristics of an instrument.

In terms of visual representation, the guitar and the ukulele are obviously different despite both being stringed instruments. The guitar is much larger, as the full-sized classical guitar is usually between 38” and 39” and has a scale length (the vibrating length of the strings) which usually varies from 24” to 26” cm (61 – 66 cm), depending on whether it is an acoustic steel-string guitar or a classical nylon-string guitar. The ukulele, on the other hand, is much shorter, as the standard (soprano) ukulele has an overall length of 21” (53 cm) and a scale length which is around 13” (33 cm). Click here to know more about guitar sizes.

This size difference between the two instruments also dictates the number of frets that are placed on the neck, as the acoustic guitar usually has between 18 and 20 frets, while the ukulele has a number ranging from 12 to 15 frets. At the same time, as the ukulele has a comparatively thinner neck and it has 4 strings, compared to the 6 strings of a guitar.

It is also worth noting that many guitars feature a cutaway which helps the player access the upper frets while playing, a characteristic which is not as common in ukuleles.

The differences between the ukulele and the guitar mentioned above are also defining the sound of the two instruments, their ranges, and their timbre. The ukulele, depending on the number of frets can have up to a 2-octave range (the 15-fret variety) or even less, should it have fewer frets. The guitar, due to having a much greater scale length than the ukulele, can cover a much greater range comparatively, as it has a range of 3 octaves in a 19 fret & 6 string configuration.

Is Ukulele Easier To Play?

The ease of learning an instrument can be one of the most important factors when choosing one to buy and start, especially when one is a beginner with little or no previous experience in the realm of music. As indicated in the introduction, the ukulele is a much easier musical instrument to master compared to the guitar, without this meaning that the guitar is really hard to master.

The main factors that contribute to the overall ease in learning the ukulele are the following:

So, if one wants to simply grab an instrument and learn within a few days how to play some simple chords and patterns easily and successfully, the ukulele can surely fulfill this desire. The guitar, on the other hand, needs a greater amount of dedication and much more time in order to develop some basic skills and slowly master all the range of techniques that can be utilized, without thought being an impossible task to accomplish (don’t forget that the guitar is arguably the most popular instrument worldwide and millions of people have learned how to play).

Additionally, it is worth noting that the ease of learning an instrument is something completely personal, as the ukulele despite being overall easier, can be quite challenging for someone with large hands due to its sheer neck & fret size. On the contrary, a guitar can be challenging for someone who has smaller hands, without though these two situations being absolute and impossible to overcome.

The easiness associated with the ukulele can also have an important downside, compared to the more challenging process of learning how to play the guitar. Since one can more easily master the ukulele, it much easier to reach the limits of your instrument and find a roadblock not due to your personal dedication and skill, but rather due to the instrument itself. This is a much rarer situation with the guitar, as it offers to the player a much wider spectrum of choices and playing styles, being virtually impossible to master all of them within a lifetime. Thus, a musician can become much more invested in the guitar as an instrument, compared to the ukulele which is possible to limit his/her vision as a player. After all, the challenge is an integral part of learning, as it is much more rewarding to achieve a difficult task compared to an easy one.

Finally, the guitar despite being harder has a significant advantage compared to the ukulele that can help a new player to learn how to play quickly: Since the guitar is a much more popular musical instrument, one can find more easily teachers available nearby or a music school that offers guitar lessons. Similarly, should one want to choose to be self-taught, then there is much more content online, in blogs and streaming channels like Youtube, that can offer free lessons to the public.

One of the most important factors that determine the choice of an instrument is the personal preferences in terms of music and the overall type of songs that you wish to learn how to play. The ukulele is an instrument mostly correlated with Hawaiian folk music, thus having a somewhat limited native repertoire. Not that it is impossible to play other genres with a ukulele, like blues, rock, or any other kind music, but due to its lack in lower registers one can find it hard to make many melodies sound correct when played with a ukulele.

The guitar is, contrary to the ukulele, an instrument well-known for its diversity, as it is found in a wide variety of musical genres ranging from classical and folk music to jazz, rock or blues and all the different subgenres that exist in between. While people who choose the ukulele usually do so because they like exactly the kind of music associated with it, those who choose the guitar wish to have a much broader spectrum of choices concerning their personal musical style.

Due to this tonal diversity of the guitar, it is easier for one to fit within a band of musicians or jam with some friends casually at home. It is an instrument which cooperates much easier with others not only due to its greater tonal range but also due to its sheer volume when unamplified compared to a ukulele. It is arguably quite hard for a band to fit a ukulele unamplified, as it is much quieter compared to most musical instruments and can be lost within a situation that includes other stringed instruments, percussion, etc. On the other hand, the guitar while not being the loudest musical instrument, can adequately fit within a band without electric amplification, both as a rhythm or a lead instrument. All the above can differ once electric amplification is a part of the occasional gig or jam, but it is not something assured and not something which is always desired.

Portability is an aspect that is definitely favorable to the ukulele, as it is much smaller and lighter compared to the guitar. It is actually one of the smallest string instruments available, a feature which can be really tempting for many people, especially those who travel around a lot. The Ukulele can fit even in a backpack which just a little larger than the medium-sized ones, making it highly portable during vacations or any kind of travels. It is both quite cheap to carry it around since you will most probably need no excess baggage space in a plane that already provided, and you can take it with you to practice or play in almost any situation, ranging from a trip to the beach to a business trip in another city. Thus, the ukulele can be a perfect instrument for someone who is always on the go, like one who travels around due to his/her profession, or a student who will spend years across different universities and cities, usually in a university housing and not a private home.

Obviously, it is much more of a hassle to carry a guitar around, especially when flying to another destination, but it is not impossible to do so. It might even cost more, as you definitely need a sturdier case and it is also much more tiring due to the weight, but it can be done. If one though doesn’t need to move around often and spends the majority of his/her free time at home, then a guitar is absolutely no problem to have around.

Which One is Costly?

The final point to compare between the ukulele and the guitar is the overall cost of buying one, something that can define the choice for a new player, especially one who has limited funds or can’t be totally sure about his future dedication in music. The cost of a new instrument can vary greatly due to its brand and the build quality, but one can offer a rough estimation in order to compare the two instruments. It is widely accepted that someone should spend at least $200 – $400 for a decent quality beginner guitar, or even more for a better quality instrument. On the contrary, someone can buy a decent beginner ukulele for as low as $50 – $100, a price range which can be really tempting if one does not want to invest lots of money initially.

As seen by all the arguments above, these two instruments can fulfill many different roles and they can ultimately be a good choice for a beginner musician. It must be stated though that since the guitar is a much more versatile instrument, one who really wants to delve deep into the realm of music can find it much more intriguing and rewarding, while the ukulele might disappoint people who want to play something other than Hawaiian-like songs. Above all, it is a deeply personal decision, but it is hard to oversee the many strengths that the guitar has when compared to the ukulele, elevating the guitar to a much wiser decision for the average person.